The Do Temple Festival is a long-standing traditional festival and has become a custom kept by the people of Dinh Bang as an indispensable beauty of cultural activities. 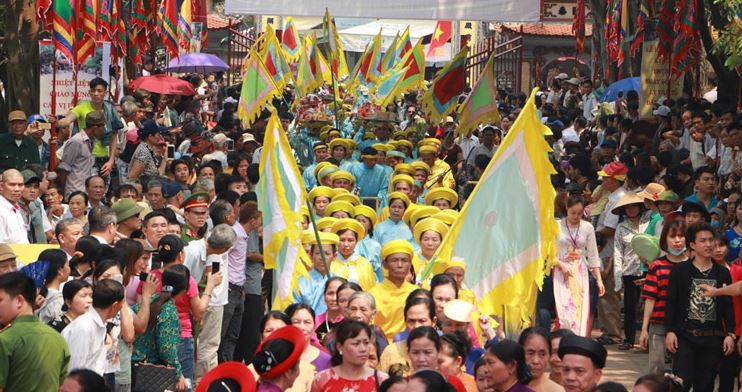 Every year, on each occasion of the festival, tourists from all over the region come here to celebrate and share the sacred atmosphere of traditional historical and cultural values.

Where is Do Temple and when does the Do Temple Festival take place?

Easygo - Do Temple is a temple built in Dinh Bang ward, Tu Son, Bac Ninh in the 11th century, about 20km from the center of Hanoi. 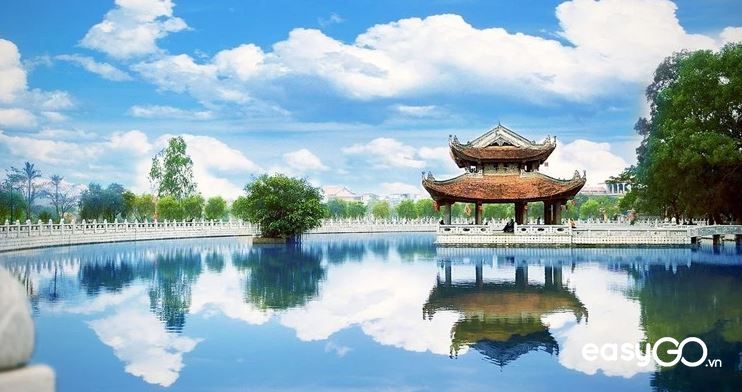 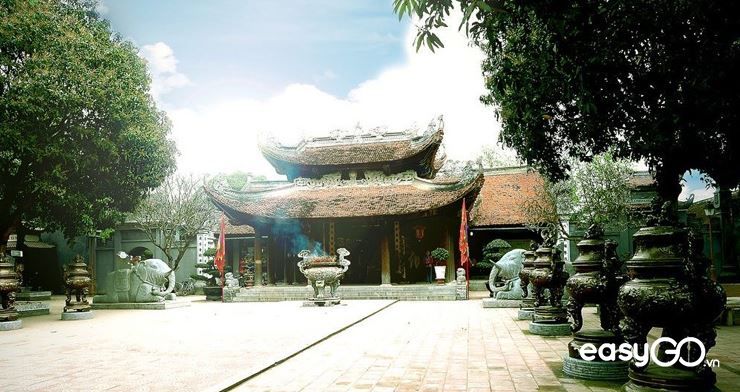 The Do Temple Festival is imbued with national cultural identity, like the sound of the original call to mark the day Thai To Ly Cong Uan was crowned, opening a flourishing dynasty, creating a brilliant Dai Viet culture.

The rituals taking place in the Do temple festival

The opening ceremony is an extremely important part, so it should be carefully prepared and performed seriously.

In the ritual ceremony, there is the "Tuc Yet" ceremony, which means the procession of Ly Thanh Mau Minh Duc, Queen Mother Pham Thi, for the purpose of gratitude to the person who gave birth to Ly Thai To. This rite also means the ceremony of filial piety, the procession of the Holy Mother to attend the child's great celebration. 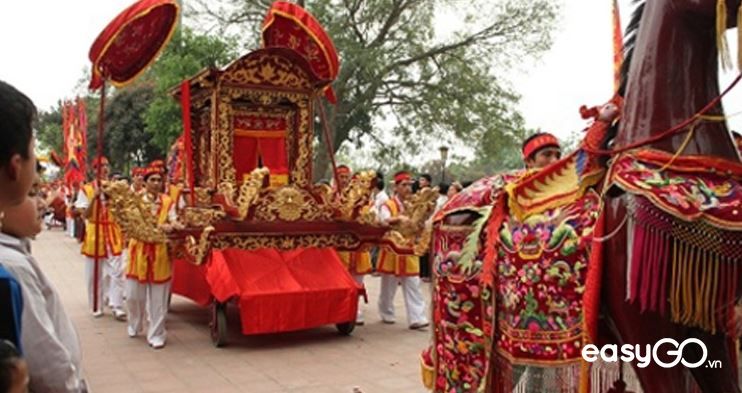 The procession of Ly Bat De will be on the way to Co Phap pagoda on March 14 to chant Buddhist scriptures on the 14th night and prepare all the rituals to process the spiritual cards on the morning of the 15th to the Do temple. One can see the scene "Eight ornate palanquins are carried from Do temple to Co Phap pagoda to listen to monks and nuns chanting sutras, and then brought back to their place. In particular, Ly Chieu Hoang's palanquin was not allowed to be carried, but had to be carried to sit in front of the shrine so that she could welcome the palanquin of the eight kings." 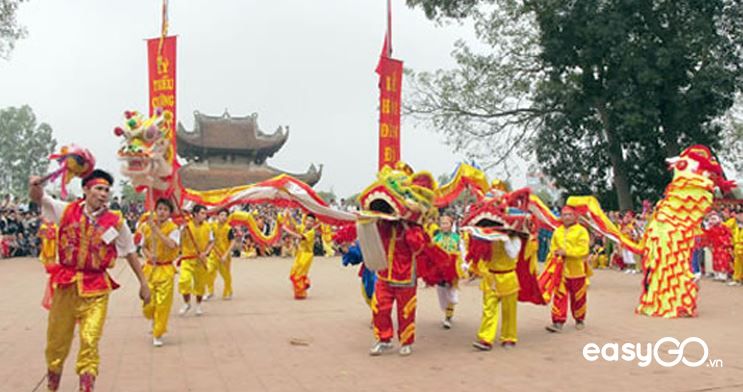 The sacrifice is an activity to show respect and always remember the great merits of the Ly Kings. In the sacred atmosphere right at the ceremony, the sacrifice on behalf of the villagers prayed for peace, luck, and faith for all people so that they would have more strength and will to overcome all difficulties in life. In the past, the Do temple festival used to carry eight palanquins, but day by day to reduce costs and ensure health, today only two floats are held with symbolic significance. 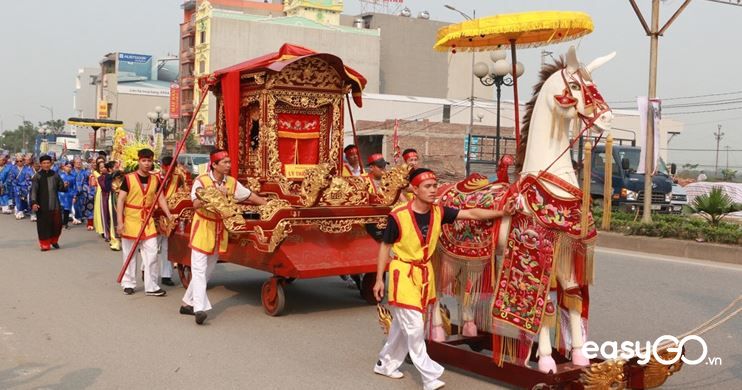 The procession on the main day of the festival attracts thousands of participants from Kim Dai pagoda to Do temple. The pioneering step included a group of martial arts generals, naked, wearing loincloths like the old style, holding bronze flags, and hundreds of soldiers following. There were also 100 people carrying palanquins wearing red shirts and black hats. The palanquin of Thanh Mau was followed by 18 female generals who were carried at the front, then the Bat De palanquin, each with a horse and 16 male generals wearing red shirts. Not only that, in the end, the procession consisted of people wearing festive costumes, incense elders and villagers present, banners covering the fields, the sound of drums resounding in the sky.

Fun activities at Do Temple Festival

If the ceremony has a religious meaning, the festival part is a collection of fun activities that outline the daily cultural life of the people. Perhaps only on these occasions, people have the opportunity to express themselves and exchange and play folk activities together.

Wrestling is a popular martial arts game during the festival. Wrestling competitions often stir up the atmosphere of the guild and attract everyone's attention. The sound of gongs, drums, people's cheers throbbing the whole area is really worth it for you to once immerse yourself in and feel. 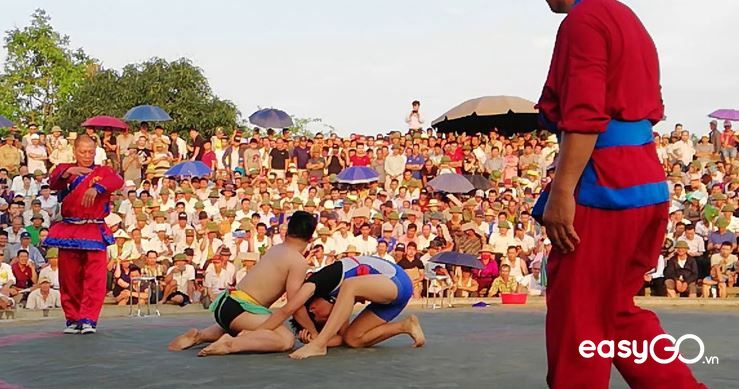 In festivals in the North, chess is always an intellectual game that appears quite popular. Do temple is no exception and people call it by a special name, the human flag. Human chess is derived from chess, the game format is the same but the difference is that the chess pieces are played by humans, replacing wooden chess pieces, the people who act as chess pieces wear clothes, hats, and shoes. beautiful fabric. Elders are often very interested in chess. Chess in the Do temple festival has many unique features because it is not only entertaining but also honors the beauty of human intelligence. 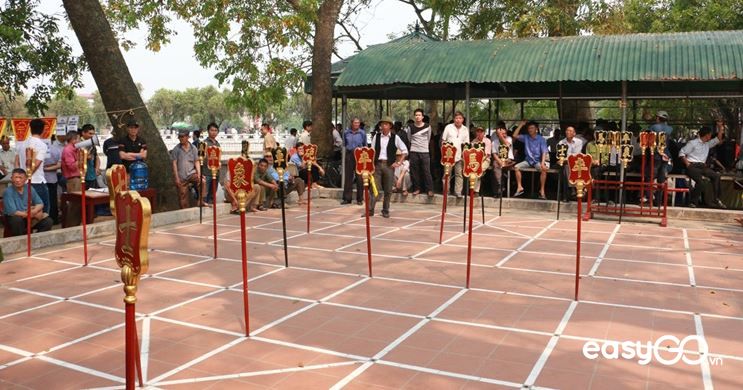 Temple Do festival is a traditional festival that has existed for a long time and has become a custom kept annually by Dinh Bang people, deeply ingrained in the people's subconscious and cultural and spiritual life. With traditional historical and cultural values, Do Temple Festival is like a source calling to remind future generations to always cherish the past and forever be grateful for the efforts of the previous generations.