If you are a person who likes to experience, likes to travel "Western backpackers", wants to be away from the busy center with few people, Ta Phin village is a place worth choosing when visiting Sapa.

Easygo - Tay Thien - Vinh Phuc is a spiritual tourist destination known by many tourists. This place has rolling mountains, poetic and charming, and there are very sacred temples.

Where is Tay Thien located? 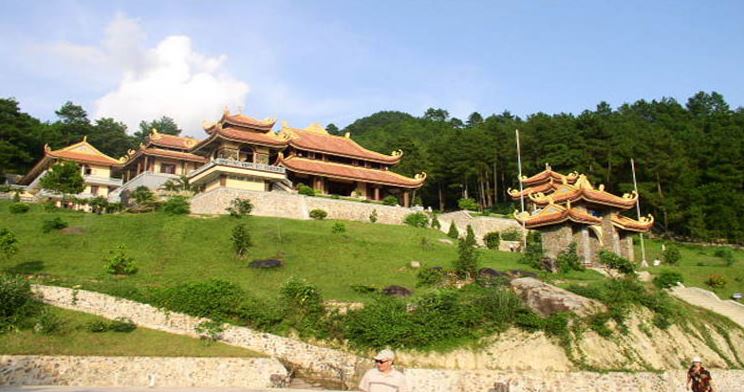 Far about 70 km from Hanoi capital, in Dai Dinh commune, Tam Dao district, Vinh Phuc province, Tay Thien is located in the basin of Tam Dao primeval forest, in the middle of the mountain, the point between the national veins, including the Hung Temple of the Van Lang state in the time of the Hung kings, Hoa Lu of the ancient capital of Dai Viet, and Tan mountain. - Song Da, powerful Buddhist temples such as Perfume Pagoda, Yen Tu.

All create a solid feng shui position based on the sacred mountain circuit radiating to the open plain and spilling down to the South, towards the great sea.

Which season should you go to Tay Thien?

You can go to Tay Thien in all seasons, each season has its own interesting points. 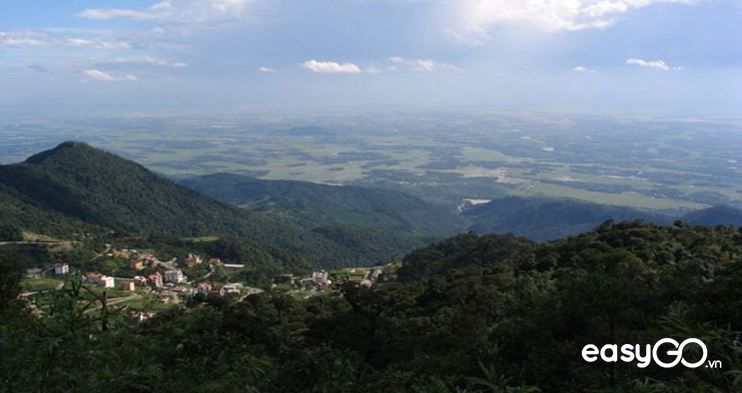 Truc Lam Tay Thien - Vinh Phuc Zen Monastery belongs to the Truc Lam Yen Tu Zen lineage and is one of the largest monasteries in Vietnam, built right next to the ancient Tay Thien scenic area. 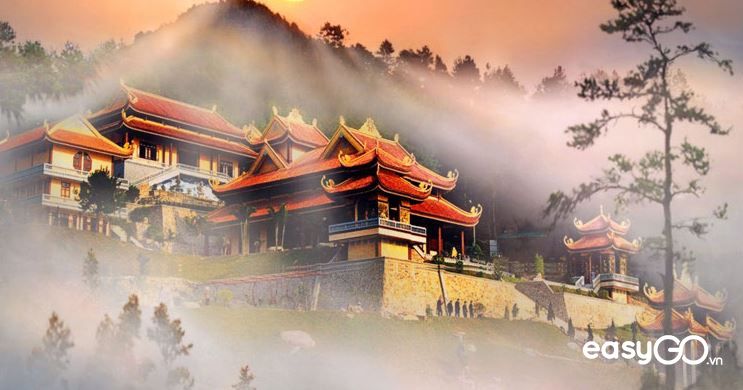 To go to the ancient Tay Thien scenic area, you can walk or use the service here. Depending on your health and preferences, you can choose walking options or a combination of tram and cable car. 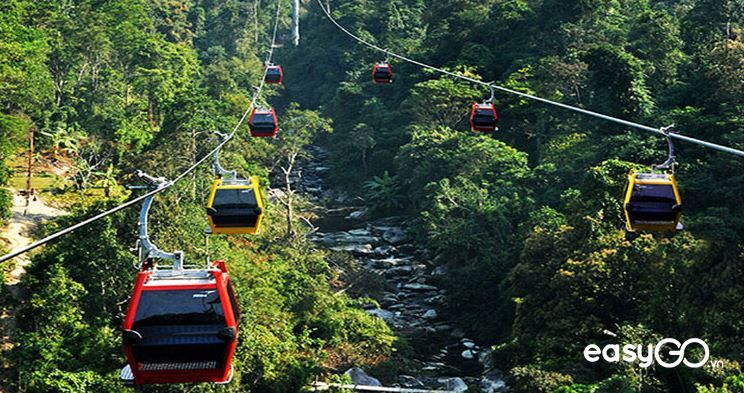 Traveling by tram: Including 20 modern 8-seater trams, transporting tourists on a 1.5km journey from the tram station (right next to Thien An and Thong temple) to Tay Thien cable car station. Ticket price: 20,000 VND/person.

Located to the left of Tam Quan gate is the Great Stupa of Tay Thien Vinh Phuc. A masterpiece of Vajrayana Buddhist architecture that has never been seen before in Vietnam.

Tay Thien stupa is designed with a height of 29m, consisting of 3 floors - symbolizing the Body, Speech, and Mind of the Buddha. 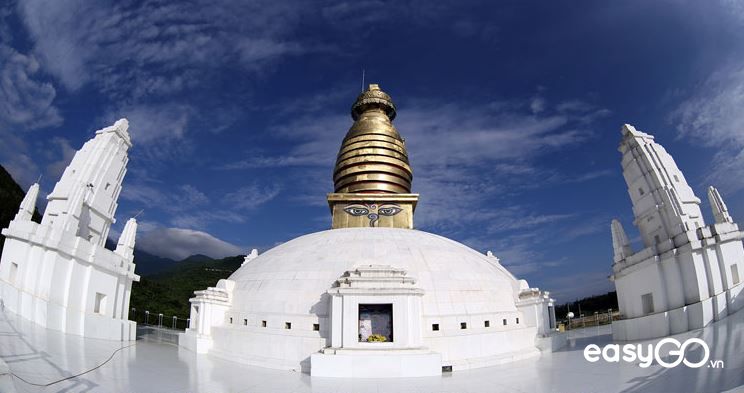 In Buddhism, the stupa is extremely important because it is the place to store the enlightened mind of the Buddhas, representing the five pure elements of earth, water, wind, fire, and air.

Thong Temple, also known as Trinh Temple, is the place where pilgrims come to report before posting paint on the Thuong Temple area - the main place of worship of Quoc Mau Tay Thien.

Thong Temple overlooks a large space with a nine-root banyan tree standing in front of the temple door as a witness of sacred history. 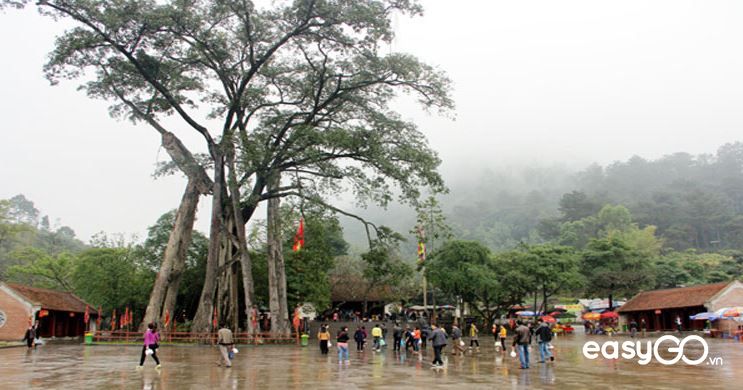 "The temple is the place where the main events of the Ceremony part of the Tay Thien Festival take place, with incense offerings, opening ceremonies, and sacrifices."

Through Thong temple, follow the shady road to Uncle Tay Thien Vinh Phuc temple. The origin of Cau Temple is the Truong Sinh slot. Legend is the place where he stayed to recruit and raise troops to follow Quoc Mau Tay Thien. 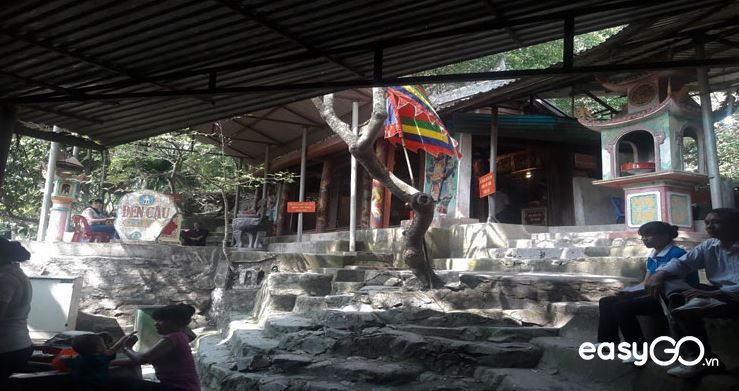 In the temple, there are two statues, including a male, a female, and a couple in dualistic thinking. People go to Uncle's temple to pray for fortune, luck, fortune, longevity, and good wishes in terms of love and children.

From Cau temple, go about 2 km more, you will come to Co Tay Thien Vinh Phuc temple. Aunt Temple has a long history and worships Co Be. Legend has it that the children of the Troi family and Quoc Mau Tay Thien helped the people to help the country. 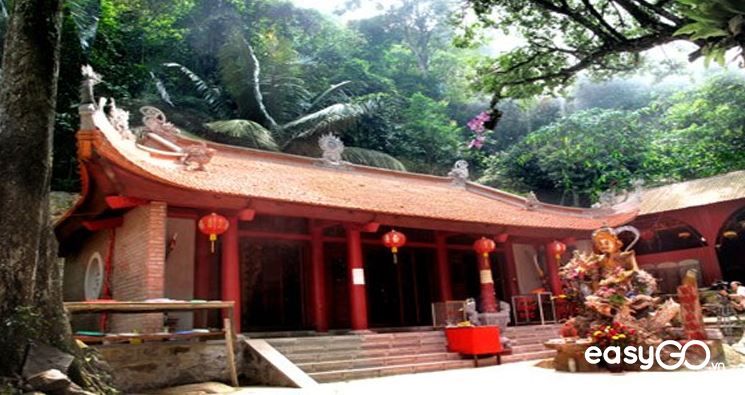 The scenery here is elegant, spacious, and peaceful with green vegetation. The stream of Giai Oan and the ancient well near the foot of Aunt temple is famous for being sacred, tourists often take water from here to offer with worship offerings.

From Co temple, following a winding path in the forest, through small moss-covered streams, you will come to Tay Thien Vinh Phuc Tinh That. The scenery here is pure, pristine, and quiet. 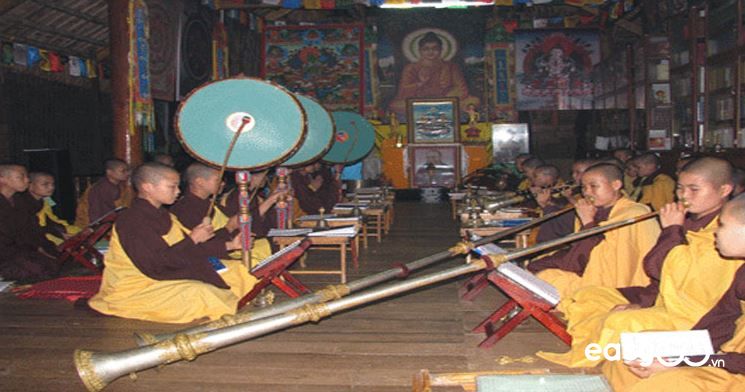 Thuong Temple is located on the slopes of Thach Ban mountain of Tam Dao mountain range, hidden in clouds, birds singing, and pine trees. This is considered the residence of Quoc Mau (Vinh Phuc), and is her main place of worship with the title "Tam Dao Son Tru Quoc Mau". 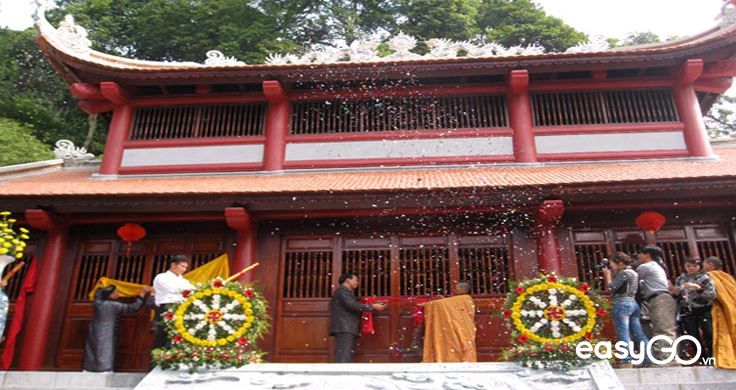 Tay Thien Vinh Phuc is a cultural and spiritual place that attracts many domestic and foreign tourists. In addition to going to Tay Thien, you can combine visiting Tam Dao. This is the ideal resort with the presence of 4 seasons in one day.